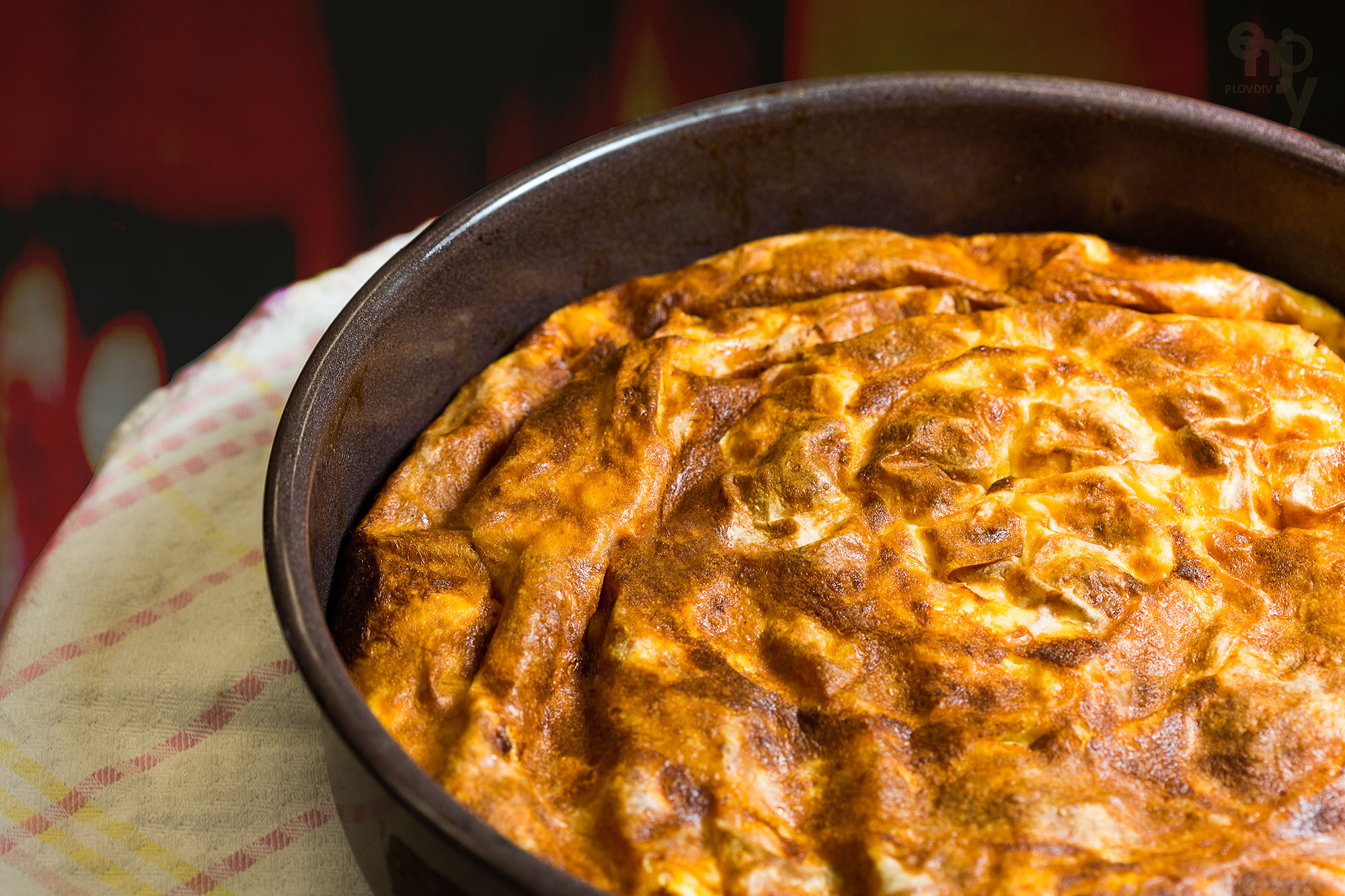 10 Food Festivals in Bulgaria to Make Your Holiday Extra Delicious

Food is an essential part of any festivity so it’s only right that it would get its day to shine as well. Bulgaria holds its cuisine in high regard, and many towns and villages that have a certain produce or culinary delicacy they take particular pride in. There is a plethora of food-related festivals happening all over the country throughout the year, and we’ve hand-picked the ones that are sure to whet your appetite. Check out our list of food festivals you simply can’t miss when you travel to Bulgaria:

The Banitsa and Boza Festival in Radomir

First, some context – boza is a type of wheat drink popular in Bulgaria, Turkey, Serbia and Macedonia. Aside from its sweet taste, boza is known for being a superb complement to most traditional Bulgarian breakfast meals. The village of Radomir considers this drink particularly special – at the beginning of the 20th century, it was the main boza-production center, and today it has the only statue dedicated to the profession boza-maker in all of Bulgaria. 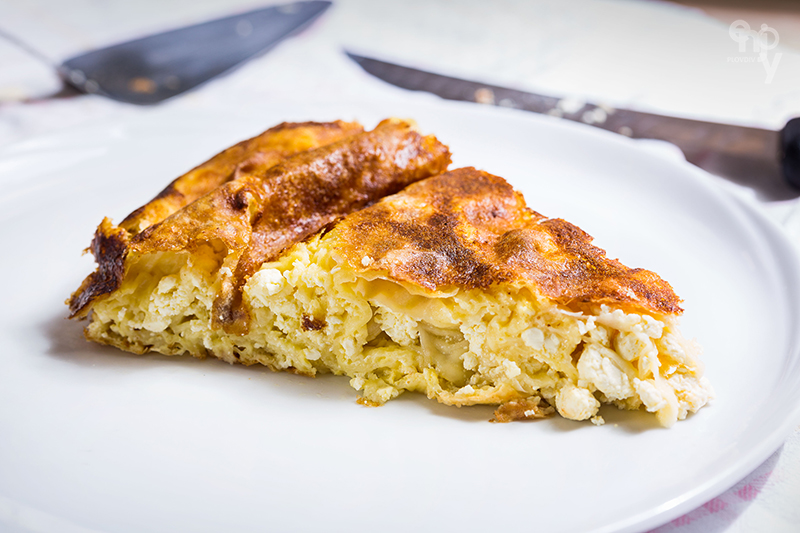 Banitsa is a type of pastry – a fixture of many folk holiday meals, and it comes with a variety of fillings, from sirene (white feta cheese), to spinach, to squash.

This festival celebrates the most beloved breakfast team up our national cuisine has to offer – banitsa and boza. Our peanut butter and jelly, if you will. The festivities include a baking contest that will give you the chance to try a spectacularly wide range of Bulgarian breakfast pastries. The festival’s main draw is, of course, the famed banitsa and boza combo, free for all.

Here, the word ‘yoghurt’ refers specifically to Bulgarian yoghurt. It falls under the umbrella of yoghurts which contain live bacteria – in this case Lactobacillus bulgaricus, a bacteria that grows naturally in Bulgaria and gives this yoghurt its particular mildly-sour taste, its thickness and the numerous health benefits it brings. It is believed to have been known on this territory for 4000 years. It’s one of the things you absolutely have to try when you travel to bulgaria - you won’t regret it. 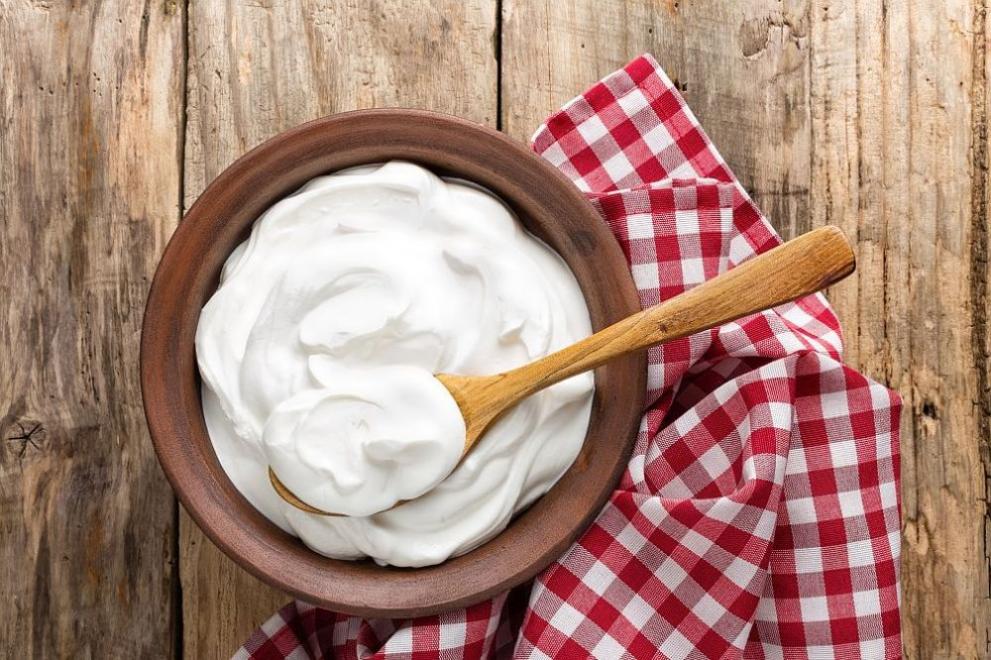 The yoghurt fair in Razgrad is a 3-day-long, festive celebration of one of the most important staples of Bulgarian cuisine, and one you’re sure to enjoy. Every year the town throws a party filled with laughter, dancing, music concerts, a folk programme and, of course, merriment. There’s even a homemade yoghurt and traditional dessert making competition. The yoghurt bazaar is also a major draw, and some of the market stalls will be selling local dishes and a variety of cheeses and dairy products, as well.

The town of Kyustendil devotes two days in the month of June to the celebration of cherries, this being the time when they are perfectly ripe for picking. The festival is associated with Kyustendil’s reputation as the Fruit Garden of Bulgaria and showcases a variety of cherry sorts grown in the region. 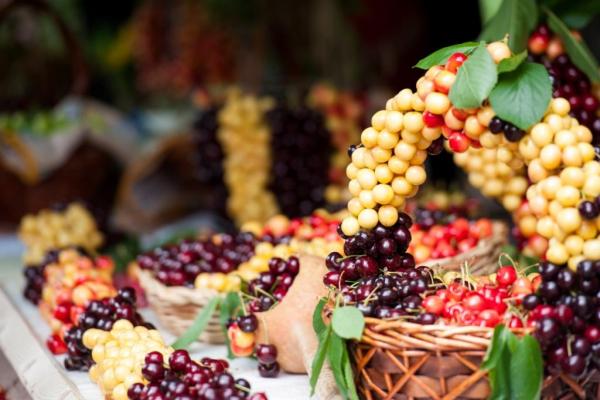 The first stage of the event is the so called “Cherries in Crafts” which consists of craftsmen from all around the country showcasing their crafts, works of art dedicated to the cherry – dolls, jewellery and other authentic works. Alongside this is the folklore festival “Cherry family birthed”, a rick arts program with dance and singers to represent the magic The focus of the festival is a showcase with a competitive character in which schools, kindergardens, different organizations and associations from the region participate. Tables are arranged and covered with the bright and delicious cherries. At the end of the judging and after the winner is chosen, the cherries are distributed and eaten.

This festival takes place in the Town of Troyan, a location well-known for its plum plantations and their use in the making of plum rakia - a local specialty. This holiday is in a sense a descendant and new continuation of the popular “Plum and Troyan Plum Rakia Festival”.

Rakia is a type of traditional fruit brandy that holds a special place in our culture. It’s a common fixture on local dinner tables, and it goes great with our famous Shopska Salad. You’ll have so many dishes and drinks to try when you travel to Bulgaria, each as delicious as the last - be sure to try our rakia as well!

Without fail every year a fair is held in Spring and Fall. This gives the locals an opportunity to showcase their hard work and homemade products to the public, from foods and drinks to anything made out of plum. The plums and the festivities they bring have come to represent the traditional livelihood, crafts and creativity of the Troyan region.

The festival of peppers, tomatoes, traditional foods and crafts

This appetizing holiday takes place in Kurtovo Konare in the month of September when the abundance of peppers, tomatoes and homemade ljutenitsa is at its peak. From its emergence in 2009 until now it has gradually become one of the most popular festivals in the country and continues to grow and support the livelihood of local farmers.

On this merry day the streets will be filled with people, the stalls will be covered in delicious produce waiting to be eaten and there will be many culinary activities in which to participate. Another part of the program is the many contests, one for biggest tomato or pepper, another for most delicious homemade cans of vegetables and many more all centered around the theme. A new addition to the festivities is a competition called “Grandma’s Colander” for the oldest and most interesting colander in which our grandmas have made ljutenitsa. Of course no festival would be complete without a queen that’s why this event will crown “The Queen of Ljutenitsa” a title perfectly suited to the theme of tomatoes and peppers.

Smilyan village as the title suggests is where this fest takes place. A tradition that takes place in October, when the locals have already harvested their crops in preparation for the event. 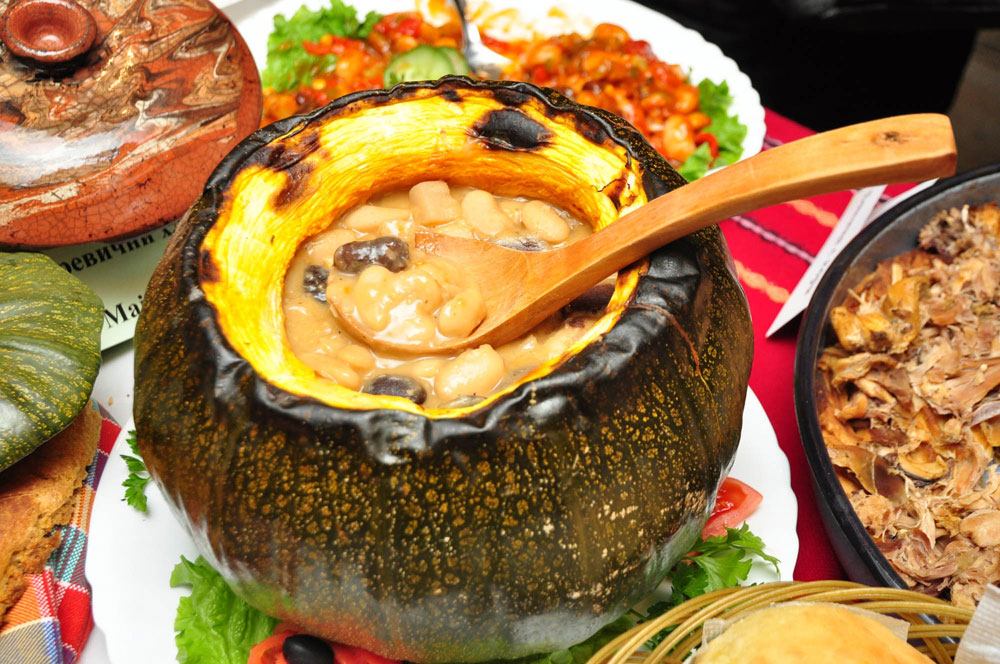 The beginning is marked by the shooting of a bean bead out of an authentic Smilyan cannon. The stalls will draw the eye with colorful pictures and items made entirely out of beans, the best of which will be awarded. A plethora of delicious homemade and traditional bean based foods will fill the event and you’ll be hard pressed to resist their inviting smell. Many who travel to Bulgaria unknowingly pass by Smilyan and miss out on their famous bean dishes - now you know to be on the lookout.

Nikyup village prides itself on its century old tradition in the growing and harvesting of big and luscious watermelons. Walk along the bazaar and participate in many fun events! Eat to your heart’s content in a watermelon eating contest, test your skills in bowling with rolling watermelons, enjoy a watermelon carving demonstration and body art, and as night falls you’ll be able to take part in a watermelon parade with lanterns all carved by the villagers.

The Chestnut Festival in Belasitsa

Chestnuts are a little-known staple of Bulgarian cuisine, but you can find them in many a home in autumn. They’re boiled, baked or prepared as part of elaborate meals, each as tasty as the last. This festival celebrates the chestnuts and every traditional recipe it’s a part of, and visitors can enjoy a wide selection of chestnut-derived delicacies and drinks to complement them. You can’t have a festival without entertainment – the programme set up by local folk groups includes music, dancing singing and even folk dancing lessons.

The Rhodope region is famous for its wide range of delicious potato dishes, and the town of Chepelare has its own fest to honor them.

The celebration involves everything you might expect – lovingly prepared potato dishes, music, dancing and tons of fun. It also exceeds expectations with a children’s workshop where kids can enjoy creative activities together. What further sets this festival apart is the conference where participants in the festival can discuss potato production in Bulgaria.

Pumpkin spice lattes are great and all, but did you know that Bulgaria has a whole festival that celebrates pumpkins, squashes and everything that goes with them – and we’re not talking about Halloween! 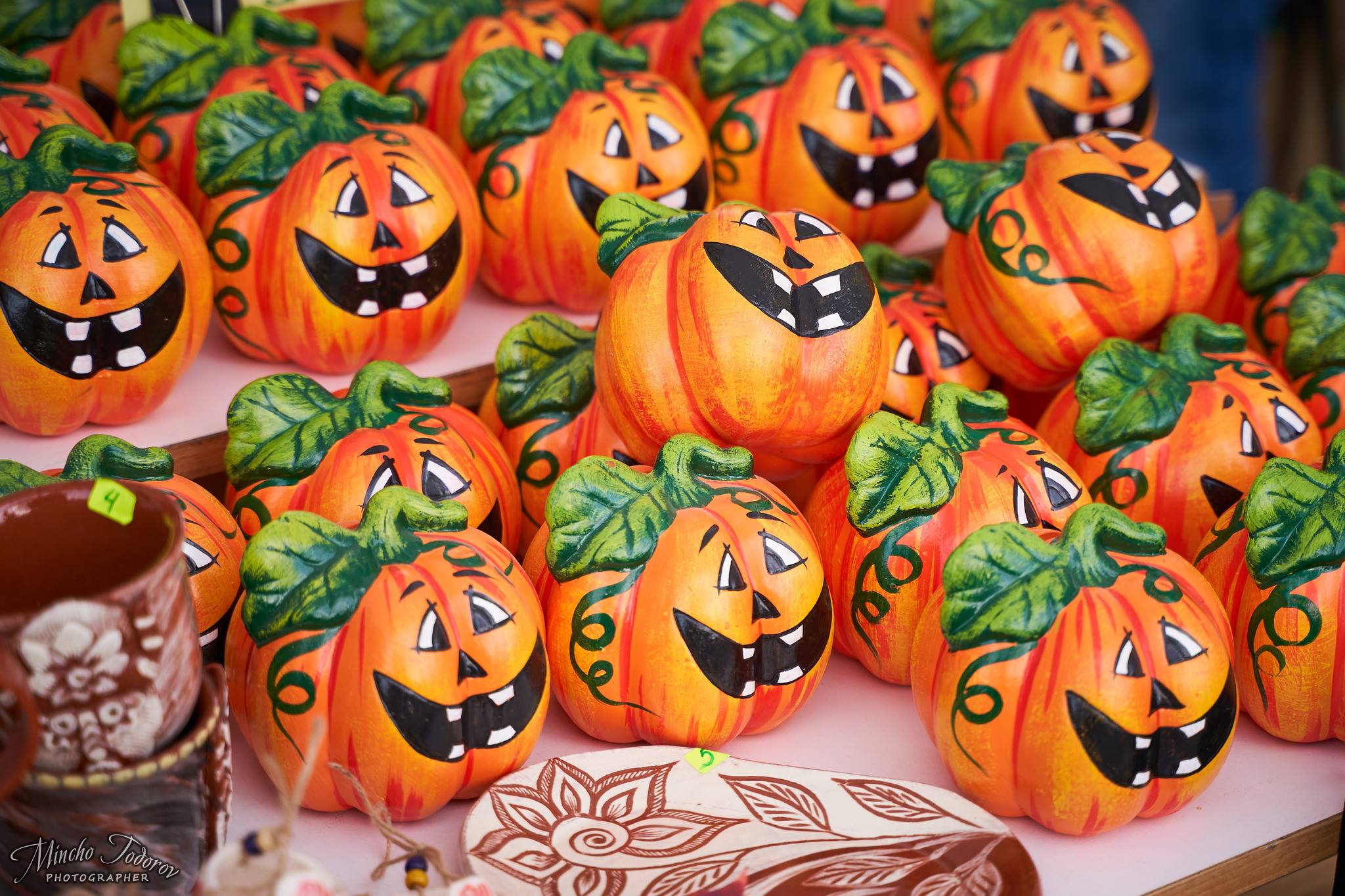 Sevlievo is known as Bulgaria’s pumpkin capital, and it takes that title very seriously. Every October, the town celebrates its Pumpkin Fest, and it doesn’t hold back – there are pumpkin-shaped market stalls, a light show and pumpkin in more forms that you can possibly imagine. The menu includes pumpkin strudels, rolls, pumpkins stuffed with dried fruit, pumpkin pastries, parfaits and so much more pumpkin-derived dishes.